Much of the critical discussion of the European political economy and the Eurozone crisis has focused upon a sense that solidaristic achievements built up during the post-war period are being continuously unravelled. Whilst there are many reasons to lament the trajectory of change within Europe’s political economy, there are also important developments, trends and processes which have acted to obstruct, hinder and present alternatives to this perceived trajectory of declining social solidarity. These alternatives have tended to be obscured from view, in part as a result of the conceptual approaches adopted within the literature.

Drawing from examples across the EU, this book presents an alternative narrative and explanation for the development of Europe’s political economy and crisis, emphasising the agency of what are typically considered subordinate (and passive) actors. By highlighting patterns of resistance, disobedience and disruption it makes a significant contribution to a literature that has otherwise been more concerned to understand patterns of heightened domination, exploitation, inequality and neoliberal consolidation. It will be of interest to students and scholars alike. 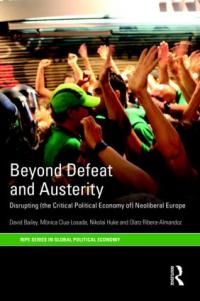